Below is the full review of “Amazing Vienna” Dance Festival and Pro/Am championship that took place in Vienna, Austria, 8th – 11th of December, 2016. First appeared in 2015, it is the second annual event organized in the city of Vienna, the motherland of Viennese Waltz. The dance championship is the main event of the Amazing Vienna Festival, which also includes the following sub events:

The city of Vienna is very famous in ballroom dancing history. First of all, it’s the origin of the Viennese Waltz, which is very popular and is in the list of international ballroom dances eligible for competitions. Johann Strauss, the famous Austrian composer of light music, created over 500 waltzes and other types of dance music. In his lifetime, he was known as "The Waltz King", and was largely then responsible for the popularity of the waltz in Vienna during the 19th century. Vienna is definitely the motherland of Viennese Waltz! And if we talk about music, then we should also mention Wolfgang Amadeus Mozart, a genius Austrian composer of the Classical era, who is still unmatched and unsurpassed by anyone in the world and history of mankind. His music was very serious and he lived before the waltz era, however, his impact into the cultural heritage of the world is priceless. You face with this history everywhere in Vienna: at restaurants, streets and souvenir shops. Besides, Vienna is still the center of Waltz. There are over 350 different annual Waltz ballroom events. 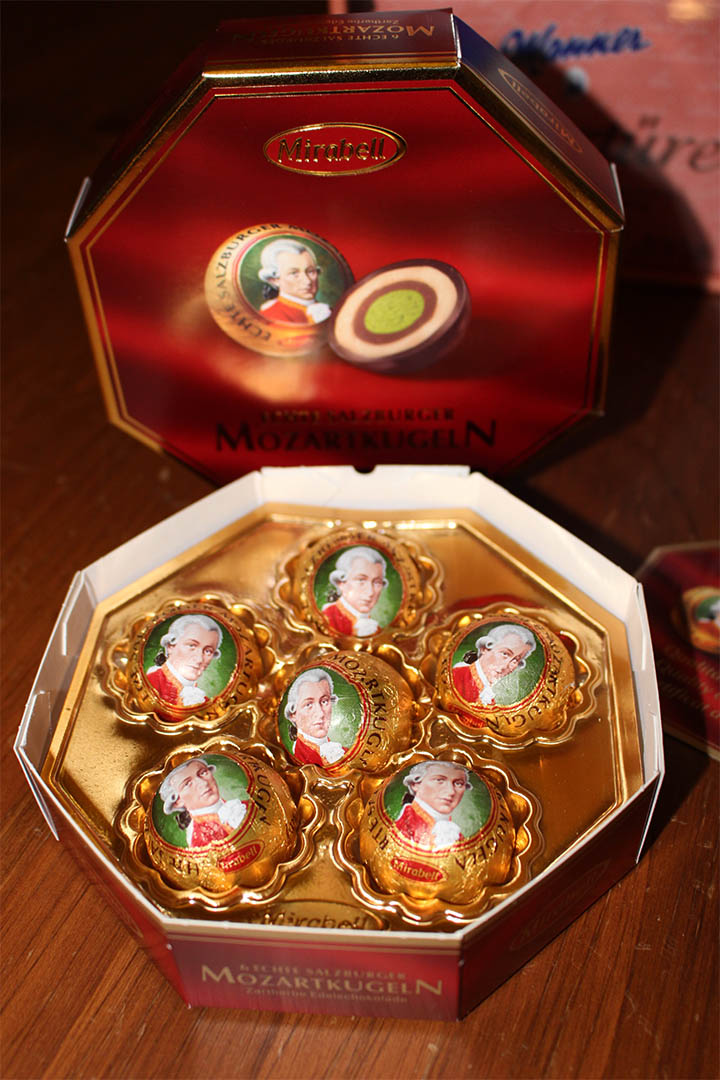 There are many unique souvenirs and gifts with Mozart, for example chocolate with different forms and design

Vienna is a very touristic place. There lots of things to visit and to try. The kitchen is also very tasty and it’s something that everyone should try, and for gourmets it can be a Klondike! We will not give you a complete guide for tourists here, but will list two the most famous dishes:

Appel Strudel or Apfelstrudel, a popular pastry in Austria which spread into many countries in Europe. It can have different toppings: vanilla ice cream, whipped cream, custard, vanilla sauce.

Viennese Milk Chocolate, a hot chocolate drink, usually in a large glass. The Viennese style means that it is covered with whipped cream. This drink is well known in other European countries, too. For example, in France it is called “Chocolaté Vienois”.

Being in Vienna is also a great opportunity for tourism! But now let’s focus on dancing. 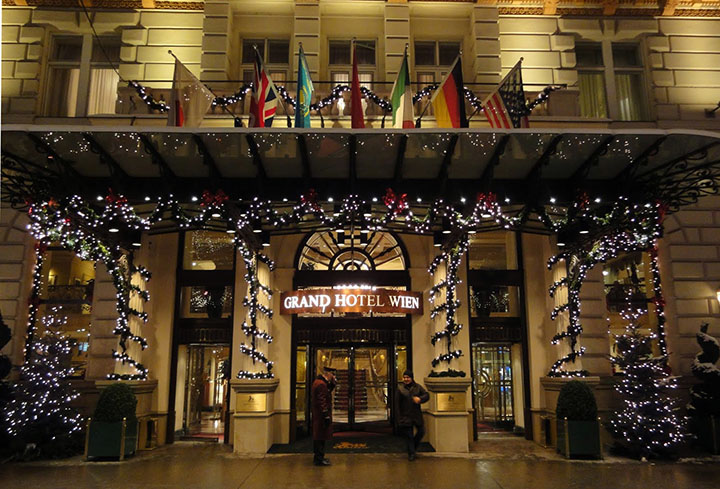 It's a beautiful building with long history and traditions.

The championship takes place in one of the most beautiful buildings of Vienna – the Grand Hotel Wien, a five-star luxury hotel, opened in 1870. The championship took 2 days: the 9th and 10th of December, 2016. The dancers competed in the following categories:

The participants presented various dance schools from Russia, USA, Israel, China, Austria, Poland, UAE, Italy, Sweden, Bulgaria, Hungary and Slovakia. Below are the featured photos and videos from the competition. A complete set is available at photo gallery and video gallery.

It was a gala evening on the last day of the festival, the 10th of December, 2016. It took place in a beautiful masterpiece of architecture – Hofburg Palace, the former imperial palace, originally owned by House of Habsburg, or House of Austria, one of the most influential royal houses of Europe. It was built in the 12th century in the center of Vienna and has a great ballroom floor and the authentic ball room, where the original balls took place.

The main part of this event is the Viennese Waltz World Open Pro-Am Championship 2016 where dance couples compete in performing Viennese Waltz in the following categories: 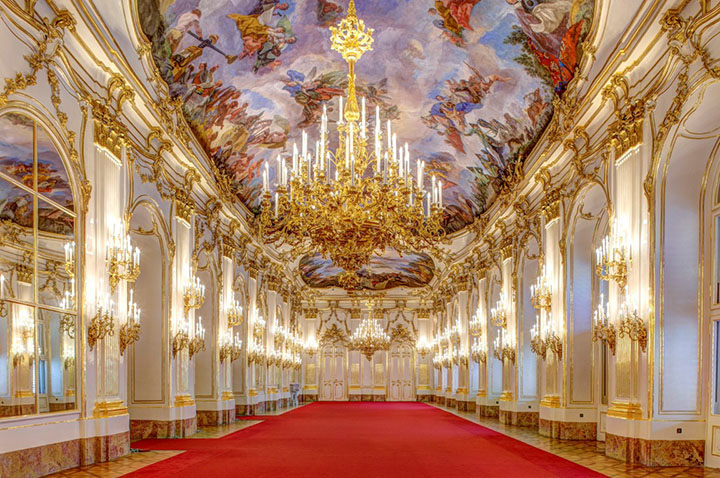 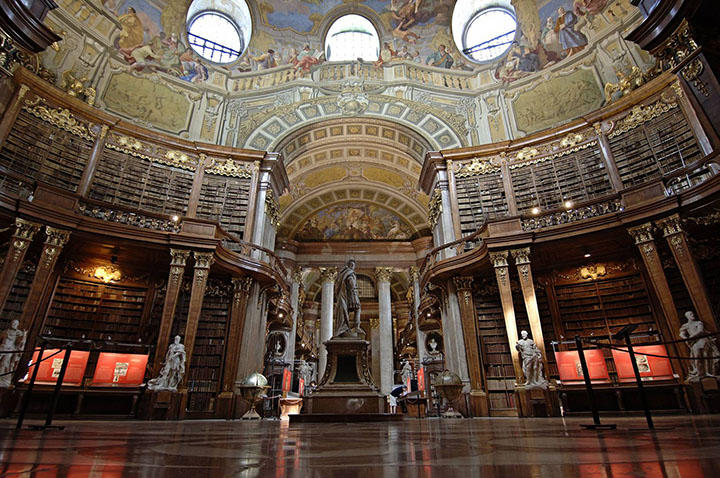 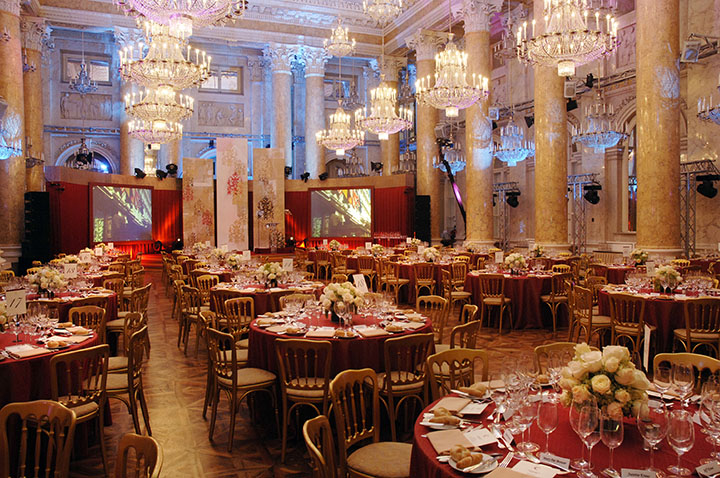 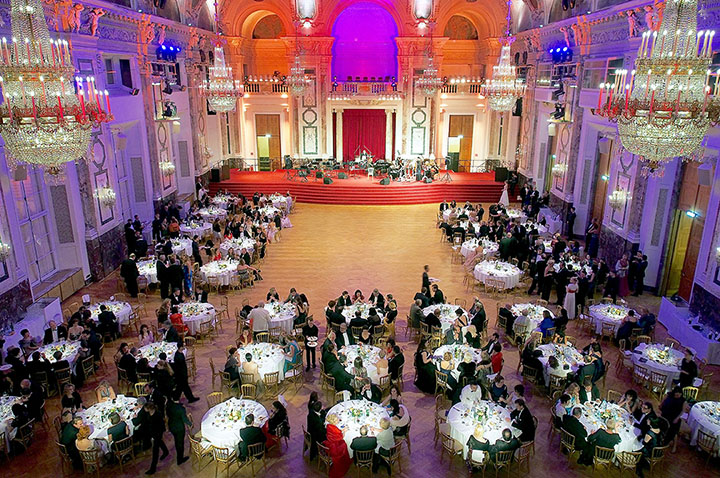 Besides the Star Night is full of dance showcases performed by best Pro/Am couples and professional special guest star dancers. Live music performed by classical orchestras added extra charm to this event. Finally, the exquisite dinner served with candles played a role of pleasant culmination of the dance competitions. But it was not the end. The Russian Ball started right after that.

The Russian Ball in Vienna 2016

Another surprise of the “Amazing Vienna Dance Festival” is the Russian Ball. It’s the final event which takes place in Hofburg Palace after the dance championship is over. As one can guess, the name “Russian Ball” (sometimes it’s incorrectly called Moscow Ball which is a different event) shows its roots with Russia and its culture. The world “ball” came from the 18th century and means a social event where people could meet, get acquainted, have conversations, and of course dance. Some people considered it as a big party with dancing and music, others used it as a change to discuss politics, economics and find new business partners or opportunities. The event took place in a large room called “ball room” or “ballroom”. Balls were very popular in the 18th and 19th centuries in different European countries and Russian Empire.

There’s a tight historical bounds between Austria and Russia and it’s the reason that explains why Russian Ball takes place in Vienna. For example, the Hofburg Palace is decorated with amazing luster lights that were a present of Alexander I, Russian Emperor, in 1814. However, the history of Russian Ball in Vienna is quote short. The tradition to organize this annual event appeared in 2007, when the first Russian Ball took place in Kursalon Wien. It got high reviews and was ranked #6 among over 350 balls that take place in Vienna. Everybody can join the ball, but the official performers are debutants from Russia, mainly from Moscow, who have preliminary special training for ballroom dancing and floor craft in crowded environments. Besides, the Russian Ball included live music performances, opera and ballet.

All the participants of the Amazing Vienna Championship and guests of the festival could join and enjoy the ball! The organizers really created a well thought-out program that apart from dance competitions included dance shows and the ball where everybody could relax and have fun.

The Results of Our Dance Studio Members

Our “Dance For You” studio took part in the competition. We traveled from Dubai to Vienna to compete with members of other dance school from all over the world. According to the Pro/Am format each couple consisted of professional dance teacher (instructor, choreographer, dancer) from our “Pro” team, and a student as an amateur dancer. It was a first competition for some of our students, others were quite experienced and already showed great results at other international dance championships. For most of them Vienna can be considered as a third serious foreign milestone in their amateur dancing competitive career after Paris (France) and Saint-Petersburg (Russia).

We are very proud of our students! It’s a well-known fact – it’s always more difficult to perform away from home, at “foreign” dance floor. Besides, jet lag adds a negative impact. Nevertheless, all of our students performed very well and were highly rated by professional jury. Below are the official results of the championship for each of our students.

Congratulations! Winning the top places in various dance categories among internationally acknowledged dancing couples is really a deserved success and a pleasant gift at the threshold of Christmas and New Year. All these fabulous achievements after lots of dance lessons and training, became possible thanks to the most incredible people who are as passionate about dancing as the whole Dance For You team, our dearest and valuable students. We are proud of them getting the best and achieving a lot from dancing, one of the most brilliant activities in the world. Dance For You studio has always been keen on competing at international level but with such fantastic support and strive only for “gold medals” from the students we feel much more power and confidence to keep conquering the dancing world.

Let’s reveal some secrets of the upcoming year 2017! We already have a strategic plan, and the first event in the list is the Crown Cup 2017. It’s annual dance competition organized in Dubai. Being on the “home dance floor” makes it possible to gain some advantage from it. But we shouldn’t relax and need to continue the dance classes and dance practice sessions. Each competition is a serious challenge and requires proper preparation. Our dance studio takes part in Crown Cup since 2015 (read more about Crown Cup 2015, Crown Cup 2016). So it will not be a surprise in the upcoming season.

For those, who are still in doubt whether to try or not ballroom dancing lessons, it’s a good opportunity to do it. We have some seasonal discounts and different dance classes divided by dance styles, difficulty level, sex (gender), type (private or group), etc. We offer trial dance lessons, so that you can get aquatinted with our facilities and educational methods before making a final decision. Please, contact us and we will gladly provide you with complete information.